When someone nonchalantly says ‘it’s only a marathon left to run’ you know you’re talking to a pro ultra-runner with extreme mental resilience. In conversation with Samantha Amend, the new British 100-mile record-holder, this strength is immediately evident as integral to her successes in such a gruelling discipline.

Following her achievement in breaking the long-standing British record with 14hr 34min 3sec at the Centurion Running 100, we spoke to the mother of two who assured us that her mentality is a two-way process. Life experiences boost her running but running has also helped her cope with life.

“It’s all about taking the positives from the negative situations,” said Amend. “When my husband died in 2009, I could have easily just given up and said I couldn’t cope. But using running I was able to channel this energy in a positive manner and allow myself to go on and achieve things I never realised I could.

“Of course it was a really tough time for me, especially with two young kids, but I put it in a box, did some counselling and found my own ways of coping, moving forward and making the most of life. And this is where running came into its own.

“It’s the same during a race really. Just because one part might be difficult, you don’t just stop. You find a way of fighting through it and striving towards the finish. No one would achieve anything if we all just gave up when the going gets tough.

“I just take stock and think ‘at the end of the day I’m really fortunate in that I’ve got my children and some people can’t have them. I’ve also got legs and am fortunate enough that I can run.’

“For me, running is the biggest and best counselling I could ever have asked for. Whether that be running on my own or with friends it’s been so important in my life and I guess that is what has also impacted how far I have got with it.

“No matter what I do in life, running will always be high up on the agenda. It’s always given me that runner’s high and when I no longer began to feel that from marathons, I just kept upping the distance.

“I’ve run more than 40 marathons over 16 years. My PB in the marathon is 2:42:11 so that’s not too shabby, but they just don’t give me that buzz anymore. And once I realised that, it was on to the next challenge.”

‘Running’ doesn’t seem sufficient to describe what it is that Amend does. Seeing as it is a term that can encompass distances from 60 metres to 60 miles and beyond, it almost doesn’t seem fair to use the same umbrella term.

But Amend doesn’t see it that way. To her, these phenomenal distance races are just a number of shorter races compiled into one. It’s not looking at it as a whole, but breaking it down into manageable parts, much in the same way as coping with life experiences.

“You can’t really think about the end goal, you have to break it down in increments. The first bit is about building a buffer, getting comfortable and settling into place. The middle section is tough because you’re in no man’s land – you’re still too far away from the finish but not just starting out.

“I’m talking around the 70-mile mark where you’ve still got a significant way to go. During the 100-mile, when it got to the point I knew I had 105 laps left, which is the marathon distance, I just said to myself ‘Don’t be ridiculous. It’s only a marathon!’

“Then I was breaking it down as far as even to the 10km, then to the five-mile which is 20 laps of the track. Then I broke it down to 5km which is just a parkrun. Easy!

“When I’d already run around 137 miles, it was a breeze and meant I was able to pick up the pace. It’s a psychological game as much as it is a physical one.”

It was records galore at our Track 100 yesterday.

Here are the records (subject to ratification) ⬇️ pic.twitter.com/MWlahOzFyA

Amend also credits a huge amount of her mental toughness to her mother.

“My Mum is incredible. She was a single mother parent of four and was always working. She didn’t complain and was always there to help us and support us in everything. She taught me how to be resilient and put my everything into all that I do and that’s evident in my running.

“She’s got an incredibly high work ethic and that’s something I’ve inherited. I guess you could say it’s addictive and I definitely would say I’ve got an addictive personality.

“Yes there were times when she struggled and I have that too. But she moved forward and so do I.

“I know she is proud of me but just finds it hard to say things sometimes. I think my friends, the ones that run with me as well, were proud last weekend and that made me feel fantastic. It makes you feel like all the investment you put into running and all the support these people give you, is really worth it and it allows you to give back because you’re doing it for them as well.” 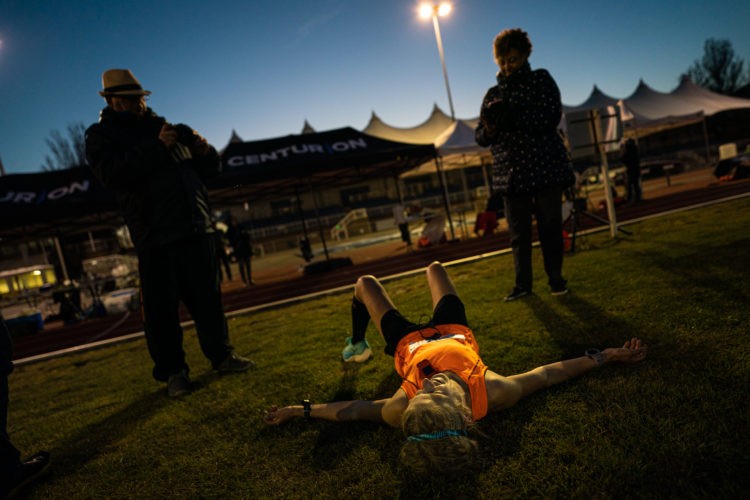 Sam take a well deserved lie down following her achievement

Not content with just the 100-mile accolade, Sam now has her sights set on the British record in the six-hour race in July. Then beyond that, it’s eyes on Romania for the 24-hour race.

But for now, it’s more about recovering from a gruelling day, not of running, but of eating ‘race food’. While they do the job and are actually quite delicious, she did admit that she gets quite sick of gels after a while. So this means treating herself to her favourite post-race meal … the humble chip butty!

And who said that athletes didn’t get to eat the fun things? 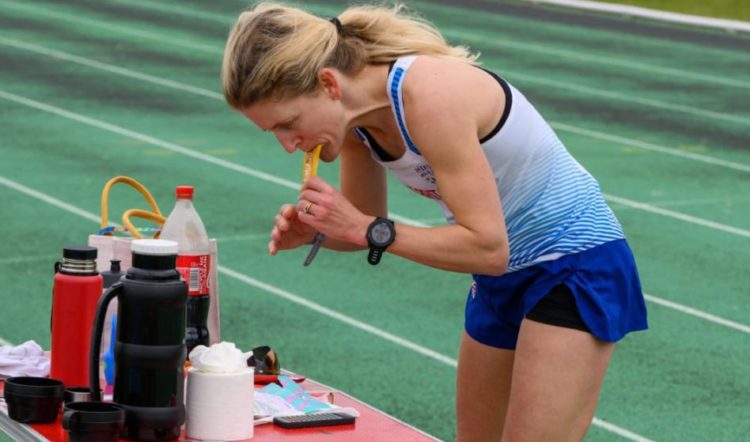