The pole vault is the probable highlight of the men’s field events but there are fascinating finals all around.

Our previews for the European Indoor Championships in Toruń also include:

Gianmarco Tamberi defends his title and goes into the event top of the rankings after his Italian Championships win.

It won’t be an easy defence as a few days before his Ancona victory he jumped 2.34m in Toruń and lost on count-back to both Maksim Nedasekau and Andrii Protsenko and these three are well clear at the top of the rankings with no one else (other than than barred Russians) higher than 2.28m.

Nedasekau has already won European junior and under-23 titles outdoors where he has also taken a European silver and is clearly on the way up. Protsenko though was a late withdrawal due to a back injury.

Joel Khan did not achieve the official qualifier but was a late addition to the 16 competitors courtesy of a 2.23m Loughborough jump and makes his senior championships debut but would need a big PB just to make the top eight.

World record-holder Mondo Duplantis is making his European indoor debut and has been over 6.00m in three of his four competitions this year and will start as a big favourite.

He clearly is over the earlier injury worry he suffered at Liévin judging by his 6.10m world lead in Belgrade last week.

Former record-holder Renaud Lavillenie is seeking his fifth title but he has not won since 2015. However he should push the Swede judging by his 6.06m win in Clermont Ferrand last weekend.

Also impressive in France was Menno Vloon who has been rewriting the a Dutch record this winter finishing with a 5.96m clearance.

No one else has cleared higher than 5.86m with Torben Blech the best of the rest in ranking terms but has no championship form to back the mark up.

That couldn’t be levelled at Piotr Lisek who has four world outdoor and indoor medals and has medalled in the last three editions of this event, winning in 2017 and will be keen of home ground to challenge the big two.

Renaud’s brother Valentin and Ethan Cormont are also in good form (and set PBs at the weekend) but defending champion and former world outdoor winner Paweł Wojciechowski isn’t. He cleared 5.90m in Glasgow last time and is half a metre below that form so far this winter.

Charlie Myers (5.65) in his first major senior event will be hoping to continue his progression but even getting nearer his 5.71m outdoor best would not probably make the final given the class of the field.

Top-ranked Miltiádis Tentóglou defends his title and has dominated Europe indoors and out and will start as a huge favourite.

Thobias Montler pushed him over the first four rounds in Glasgow and should medal again though third place looks open.

Gabriel Bitan had a big jump in the Romanian Championships but has never jumped over eight metres elsewhere indoors or out and has no international form to back that jump up.

Former European junior silver medallist Jacob Fincham-Dukes will be in the medal mix if he can replicate his Lee Valley trials form as will 2017 European under-23 champion Vladyslav Mazur who was eighth in Glasgow.

On previous year’s form Georgian Bachana Khorava could also be in the medal hunt.

Pedro Pablo Pichardo (below) may not be in his 18.08m outdoor form from 2015 but he has a proven championship record with three world indoor and outdoor medals and is out on his own at the top of the rankings. 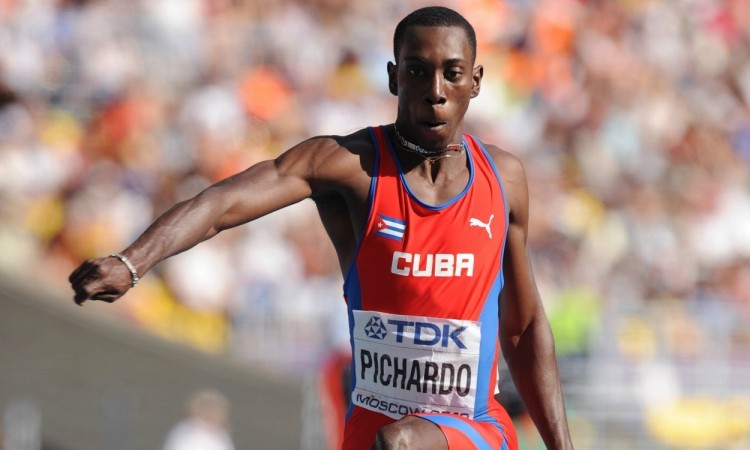 Former world and European junior medallist Melvin Raffin has been consistent this winter around the 17.00m mark and should be in the frame.

Max Hess, third in 2017 and 2019, has more experience having also won a European outdoor title and a world indoor medal and could well medal yet again.

Shock Glasgow winner Nazim Babayev does not defend settling for a win in the Balkan championships but his compatriot Alexis Copello does. The former Cuban is now a vet (M35) but was fourth in the last world indoors and with his solid competitive record won’t be far from the action judging by his 16.84m this year even if he is a decade past his very best.

Rankings of those entered:

Even ignoring the home advantage, it’s impossible to look beyond 2019 winner, European outdoor champion and top-ranked Michal Haratyk as a very clear favourite.

2019 bronze medallist Tomas Stanek is a proven championships competitor and looks a surefire medal shot based on his 2021 form.

Armin Sinančević does not have the championship form to match his best marks. It’s worth noting he threw a huge PB in the Doha qualifying (21.51) but failed to register a throw in the final.

Sweden’s Wictor Petersson, a former world youth and junior medallist, is on the way up as is Norwegian record-holder Marcus Thomsen, who has greatly improved from his seventh in 2019.

The 2017 champion Konrad Bukowiecki, who is still only 23 years old, has thrown 22.00m in the Toruń Arena but this year has managed just 20.54m and would need a big improvement to be a factor.

All eyes will be on decathlon world record-holder and world indoor champion Kevin Mayer. He has not done a full multi events competition this year but has shown great glimpses of form such as a 7.68 hurdles PB and he would have to do something very wrong not to regain the title he won in 2017.

Defending champion Jorge Urena has also not completed a heptathlon this year and has little form of note but based on his Glasgow win and 2020 form (6143) he should still be in the medal hunt.

European leader Ilya Shkurenyov (6269), who was third in 2019, can’t compete due to the Russian ban.

In his absence, Paweł Wiesiołek tops the 2021 lists of those entered and also has home advantage but his championships record is abysmal and will be under far more pressure than ever before.

European junior champion Simon Ehammer is a few points down and will be one to watch in his first major senior event.

Risto Lillemets and Dario Dester (fifth in the European juniors) are other promising young athletes with little senior form but within range of a medal judging by their 2021 form.